Home > Ivey’s Blog > Cornwall > Our 5 favourite Cornish myths and legends, including that of Mother Ivey

Our 5 favourite Cornish myths and legends, including that of Mother Ivey 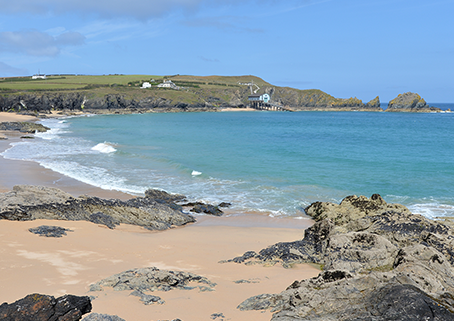 Cornwall’s mystical landscape has often been the source of legend.

As well as being home to giants and pixies, it’s also thought to be the birthplace of kings and the downfall of thieves. Discover a few of our favourite myths here:

The majestic St Michael’s Mount is rumoured to have been built by the Giant Cormoran – who would wade ashore to steal livestock from the local farms of Marazion. A reward was offered in return for killing the giant and a young boy called Jack volunteered for the job. One moonlit night when the giant was sleeping, brave Jack crept along the causeway and dug a deep pit in the side of the mount. When the sun was just starting to rise, Jack blew his horn to wake Cormoran from his slumber, who charged down the mount – but blinded by the rising sun fell into the hole. Visit the castle and search for the heart shaped stone of the pathway, which is said to be the heart of the slain giant – rumour has it that if you stand on the stone you can still hear the giant’s heartbeat!

According to legend, Mother Ivey was a white witch and healer, who cast a curse over the field of a local wealthy family known as the Hellyer’s – who ran a lucrative pilchard processing business after they refused to help feed starving villagers. Instead the pilchards were ploughed into a field as fertiliser. Mother Ivey, in her wrath, cursed the field so that ‘if ever its soil was broken, death would follow’. The Hellyer’s continued to use the field as though unconvinced of the potency of such curses. This attitude was to be short-lived, as whilst riding in the field a little while after, the Hellyer’s eldest son was thrown from his horse and killed!

On the North Cornish Coast there lived a particularly troublesome giant called Bolster, who was infatuated with a local girl called Agnes and pursued her tiresomely. Irritated by the attention of the giant and wishing rid of the evil brute, she asked him to prove his love for her by filling a hole in the cliff at Chapel Porth with his own blood. Bolster considered the task to be easy due to his huge size and plunged a knife into his arm and waited for the hole to fill. However, the blood continued to flow like a crimson river, as Agnes had kept a secret – the hole actually led from the cliffs into the sea. Growing weaker and weaker the giant eventually died and it is said that the red stains on the cliffs of Chapel Porth are those of Bolster’s blood.

One of the most romantic Cornish legends is that of the love-struck mermaid, who captured the heart of Matthew Trewhella, a young man from Zennor. Entranced by the stunning beauty of the mermaid and her sweet singing voice, he turned to a life beneath the sea. As a lasting memory to Matthew, the villagers carved a Mermaid Chair from wood which can still be seen in St Senara’s Church today and is thought to be over 600 years old. Visit on a warm summer’s evening and listen carefully – as it is said that their voices can be heard joined in song, emanating from beneath the waves.

Probably Cornwall’s most famous legend is that of King Arthur. Thought to have been both conceived and born at Tintagel Castle in North Cornwall, his time in the county is well scattered with myths and magic. Visit Slaughterbridge, the site of ‘King Arthur’s Stone’ which marks the spot of the last battle of Camlann and Bodmin Moor – where through the wild and rugged landscape lies Dozmary Pool. Gaze beneath the rippling waters for a glimpse of the sword of Excalibur, which is said to have been returned to the Lady of the Lake here.