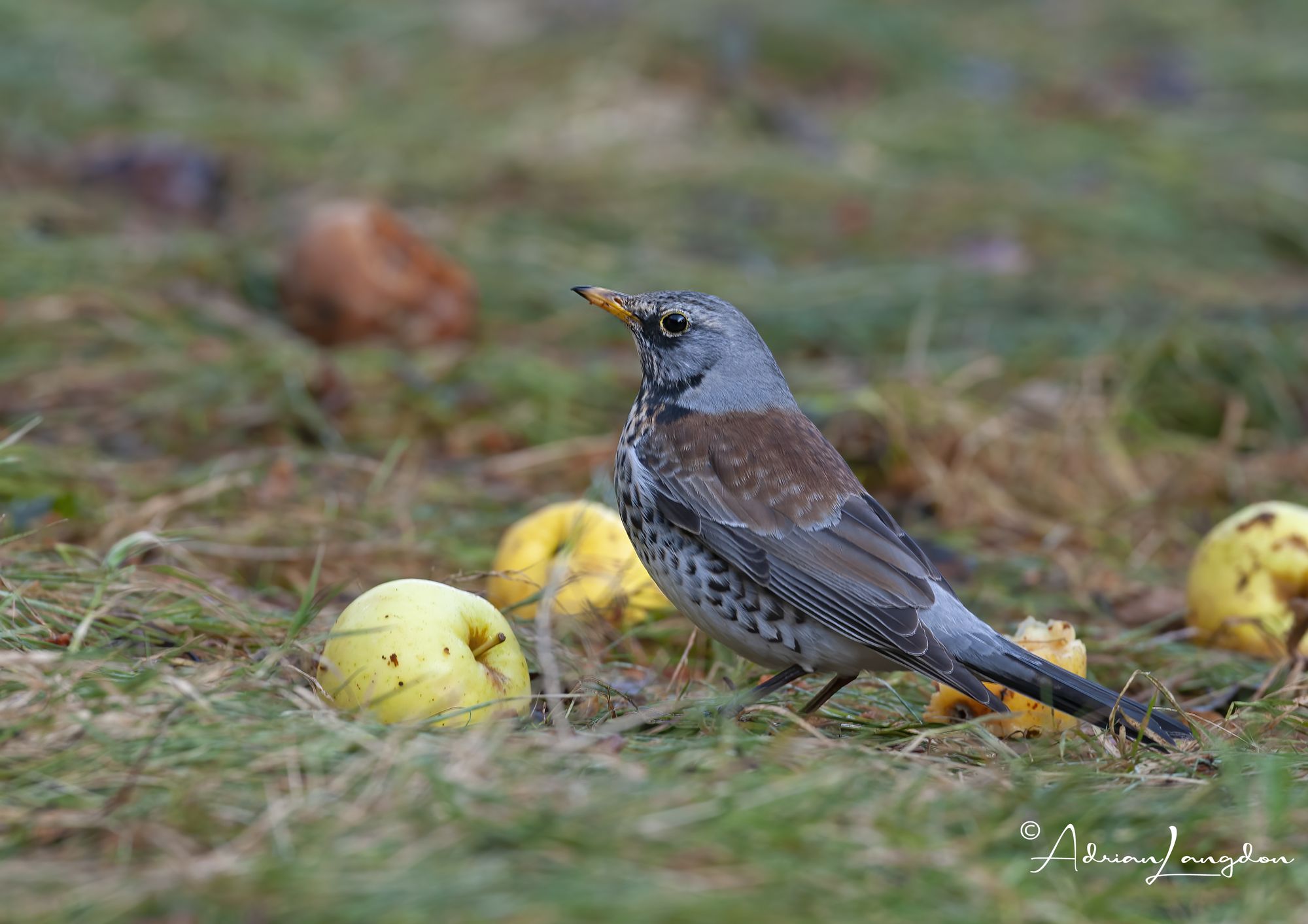 Local wildlife expert Adrian Langdon tells us what to look out for this Winter in Cornwall.

The first Fieldfares tend to reach Cornwall in late autumn and then stay all the winter feeding up on the berries of trees and shrubs. Most of them will have arrived from Northern Europe in large flocks and their chattering call can be one of the first things to alert one to their presence. A large upright thrush they have a grey head and rump with a chestnut-brown streaky back. They love eating fruit and can be found feeding on windfall apples in orchards during the winter cold spells.

Molehills seem to be more obvious in winter and aren’t restricted to low lying meadows and fields but can be found on the clifftops and even high up on moorlands.

The number of soil heaps thrown up by the moles is not representative of the number of moles beneath. 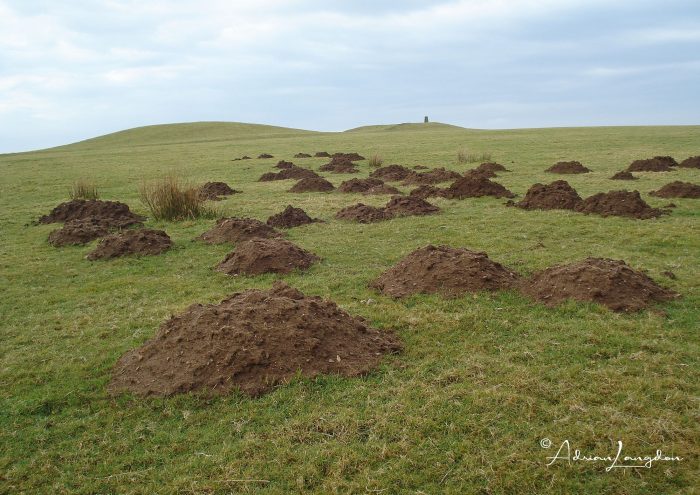 Unpopular with farmers and gardeners moles do however aerate the soil and feed on lots of slugs. Seeing the spoil heaps is much more likely than seeing a live mole but if one did show then it can be recognised by its velvet like coat, small ears and eyes and short powerful front legs that resemble flippers.

Teasels seem to take on much more prominence when coated with a layer of frost, standing erect in the landscape when most other plants have succumbed to the wet and windy ravages of winter.

The ones we see are actually the seed heads and they are a favourite food for goldfinches that love to perch on the top of the teasel to extract the nutritious seeds from amongst the prickly barbs. 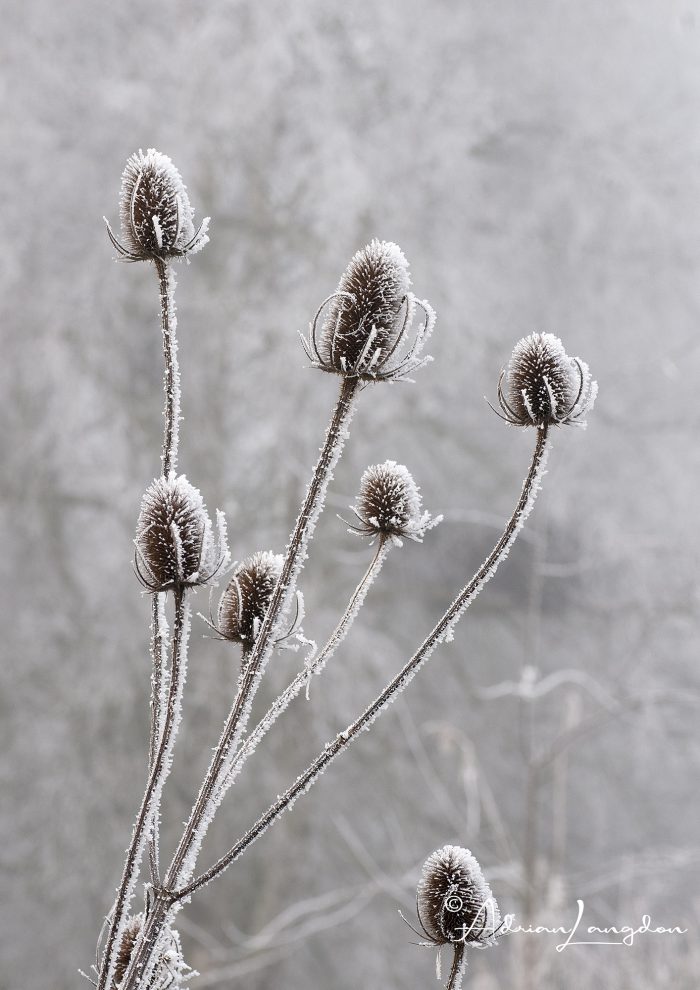 Teasels have thorny spikes all up their stems and have a conical shaped flower head that is green with purple flowers in the summer but dries hard to a skeletal version in the winter.

Large flocks of Lapwing or “peewits” call Cornwall home from the autumn through to March.

They spend time on estuaries, mudflats and open arable fields feeding on invertebrates that they extract from the soil and mud. Catch a view of a lapwing in the sunshine and it has an iridescent green sheen that makes it look totally different from when we see it in the sky when it often looks black and white. 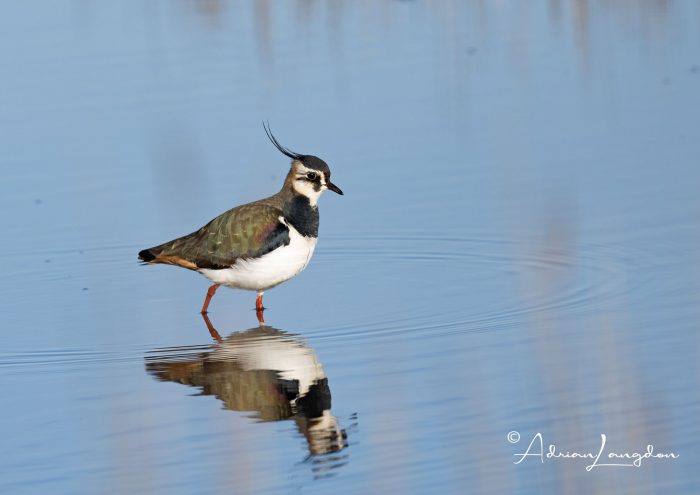 A few Lapwings hang on in the county to breed in the spring but the numbers have fallen badly in recent years and those that do stay usually have their eggs or chicks predated.

Walking along the tideline of a Cornish beach can usually turn up many interesting items of natural debris.

One of the most interesting is the Mermaids purse which is the used egg case of a shark or skate. There are many different “purses” and a lot on identification guides to the precise species in books and online so well worth looking for these things on a winter beach, especially after a storm or spring tide. 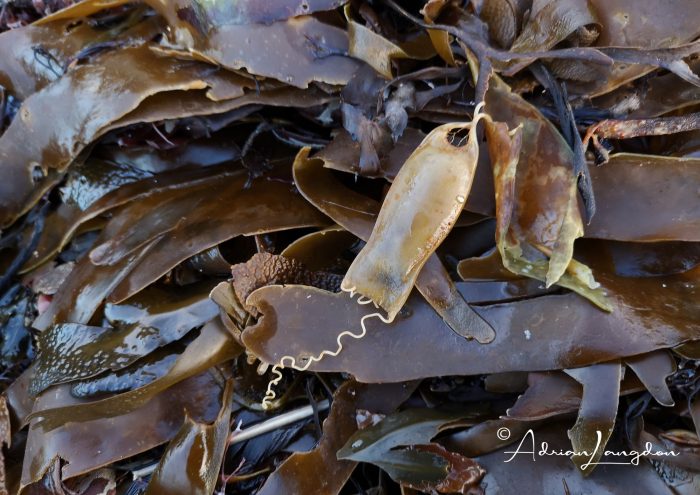 Most of these egg cases will have contained a single egg and the young will have already left but on rare occasions the egg or embryo can be still be seen.

Roe deer have become quite numerous in Cornwall in the past 10 years and sightings around the middle of the county are almost daily. 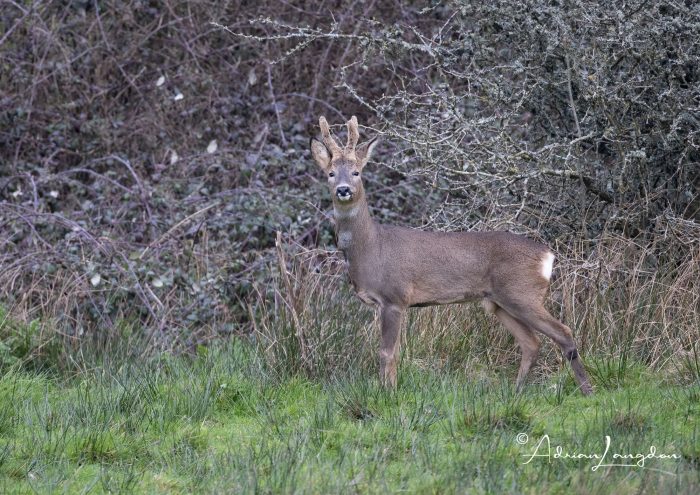 Again the Camel trail from Bodmin to Wadebridge provides a good chance of viewing these medium sized deer especially in the early morning or late afternoons in the winter. Roes have short antlers, no real tail and a pale rump which is used as a warning sign to others within its social group.In winter the males, known as bucks, will have their antlers in velvet which they will shed in the spring to be ready for the summer rut.

A bright patch of red amongst the wet woodland leaf litter is the first visible sign of the beautiful Scarlet Elf cup fungus. 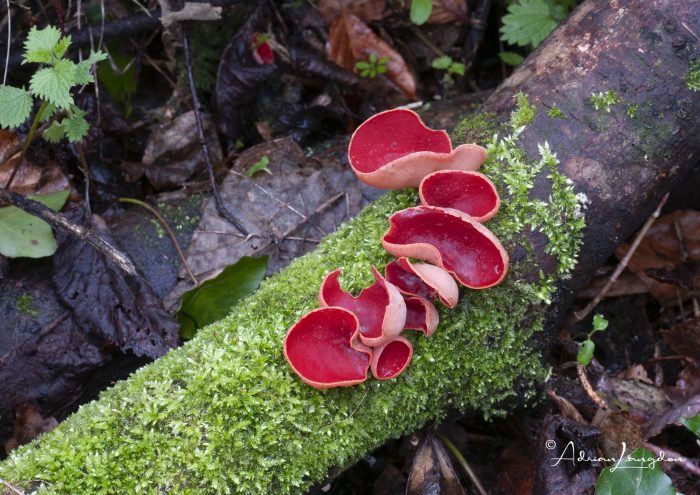 Growing on dead and decaying sticks and branches the bowl shaped cups have no obvious stems and only the inside of the cups are red with the outer skin being a silky pinkish colour and hairy texture. A common species of fungi throughout Cornwall many wet woodland areas will show this pretty species.

Most views of Snipe are of either the rear end of the bird as it zigzags its way over the distant horizon or of it hanging in the window of the local butchers near to Christmas.

They do however like to bask in the late afternoon sunshine and this is the best time to study this small wading bird that has short legs and an incredibly long straight beak. This beak is used to probe into the mud of its favoured habitat of wet marsh, meadows and moorland. 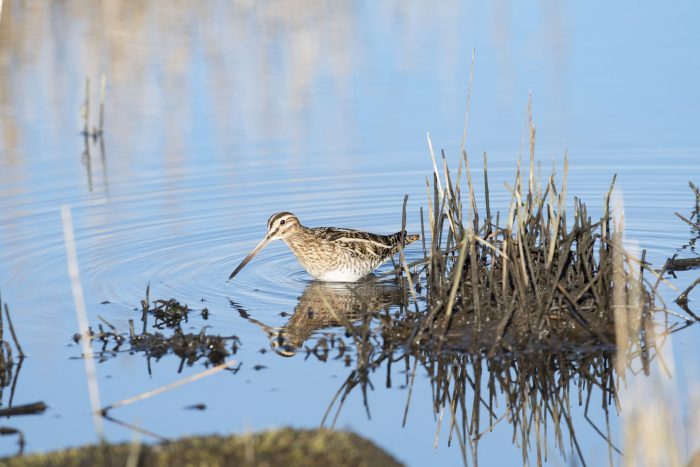 A few snipe stay on to breed in the county but many will move at the end of winter to more northern areas to nest.

A true migrant to the county Snow Buntings are normally found on the coast, on headlands and areas of stony ground and scree that resemble its breeding grounds in Iceland, Greenland and Scandinavia. 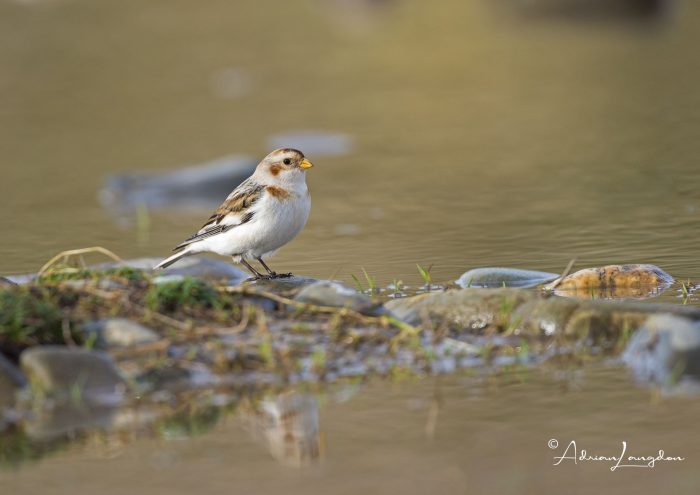 Most birds arrive in the autumn as passage migrants and move on through to warmer climes but at times some stay on in the county into early winter. With very white plumage in the summer these buntings develop a warmer sandy colour in the winter which helps them blend in when on our sandy dune slacks and clifftops. Trevose, Newquay and Gwithian are all north coast areas worth a look in early winter.

The Whooper Swan breeds in Iceland and is a regular winter migrant to Cornwall in small numbers. The Camel and Hayle estuaries are good places to spot these stunning swans.

They have a long straight neck with black legs and bills but most noticeably of all there is a bright yellow triangle patch on the bill. 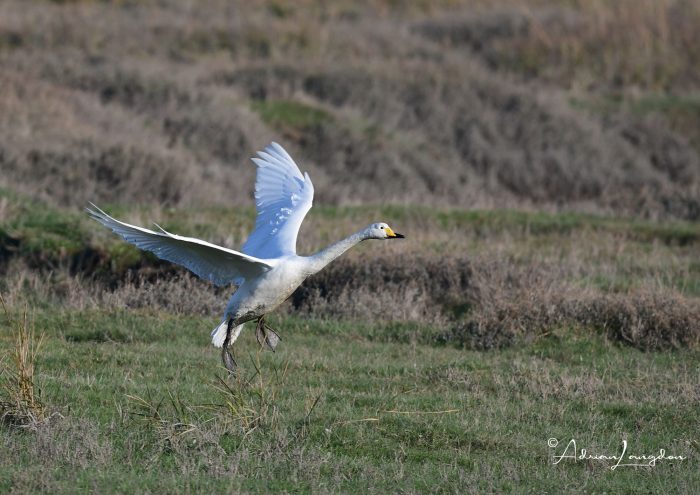 It’s always worth looking closely when there is a group of swans on the estuary or grazing in the fields to check that they are all our resident Mute swans as it can be easy to overlook these beautiful winter visitors.

Click here to find out more about our beautiful Holiday Park on the North Cornwall Coast, which has its own nature reserve and is situated in an ‘Area of Outstanding Natural Beauty’.