Did you know that the average butterfly has an adult life span of two weeks or less? Below are just a few of the species that can be found either in or around the Park. 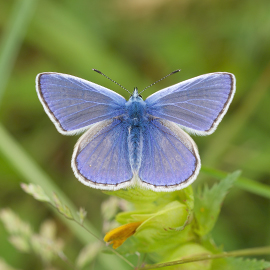 Look out for a tiny flash of bright blue when you are walking around the Park or through the Nature Reserve. It will be the upper wing colour of the male Common Blue Butterfly, the females are duller in appearance and are almost completely brown. One of the smallest of the UK butterflies, their wing span is only 35 mm. They often have two broods (emerging twice a year in May and then again in late July). 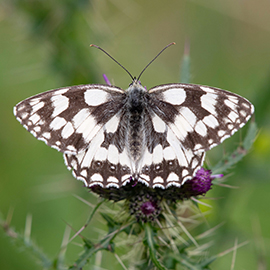 When you see a Marbled White you know that summer has definitely arrived. Its favourite food plant is Field Scabious, Common Knapweed and Wild Marjoram which can be found in the roadside verges and wildfower meadows close by. The Marbled White is a medium sized butterfly with a wingspan of 53-58 mm and they only have one brood per year. 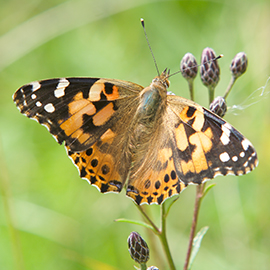 The Painted Lady is a migrating butterfly and spends the winter in Northern Africa. They arrive back to the UK in late May to early June. One of their favourite food plants is the Buddleia Tree otherwise know as the Butterfly Bush as its very rich in nectar. When you are walking around the Park take a look at the purple Buddleia Trees and see if you can spot a Painted Lady. The Painted Lady is a medium sized butterfly with a wingspan of 50-56 mm and they only have one brood per year. 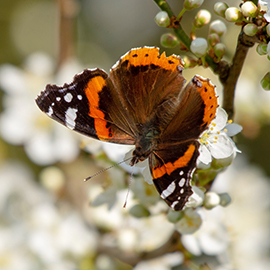 One of the largest of the UK’s butterflies, the Red Admiral can be identified by its strong orange-red band on each upper wing. Like the Painted Lady, Red Admirals also like to drink nectar from a favourite plant – the Buddleia. In the summer months, keep a look out for lots of tiny black caterpillars on common nettles as the Red Admiral lays its eggs in the nettle tips. The Red Admiral is a large sized butterfly with a wingspan of 64-78 mm and they only have one brood per year.

The Small Copper is a small bright orange butterfly that can be found in colonies nearby. The males are very territorial and will chase off any insect passing too close and then return to its favourite spot to sunbathe. One of their favourite food plants is yellow ragwort which can be found in the wildflower meadows on the Trevose Headland and in the Mother Ivey’s Bay nature reserve. The Small Copper is a tiny sized butterfly with a wingspan of 32-35 mm and they can have up to three broods per year.

When to see: April/May to October 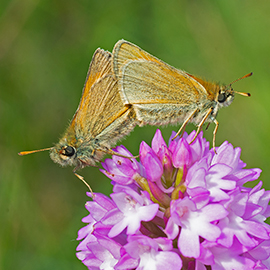 The Small Skipper emerges in late June. The tiny orange butterfly could almost be called a moth in the way that it flies. Look out for them posing in the sunshine on the end of long grass stems, wings held in the half-open posture distinctive of skipper butterflies. The Small Skipper feeds on knapweed, has a wingspan of just 30 mm and only has one brood per year.

When to see: Mid June to mid August 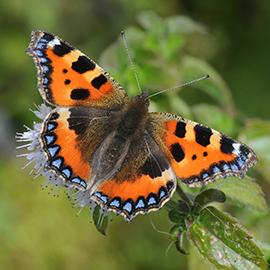 One of the first butterflies to be seen in spring and one of the most common of our UK butterflies. They can be found in and around the Park especially feeding on the rich nectar of the Buddleia Tree. Slightly smaller in size than the Red Admiral but the orange and black patterning on the upper wings makes for a very recognisable butterfly. If you look closely you will also see vidid blue dots around the edge of the wings. The Small Tortoiseshell is a medium/large sized butterfly with a wingspan of 50-56 mm and they can have up to two broods per year.

When to see: March to October 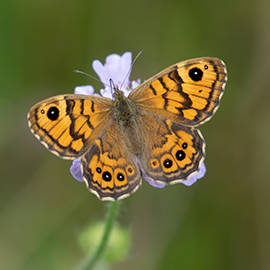 The Wall Brown can be seen basking on stone walls, rocks, and stony places. One of the best places to spot one is along the coastal path around Mother Ivey’s Bay and the Trevose Headland. Butterflies need warmth and and the sun to be able to fly and the Wall Brown manages to do this by basking in sheltered sunny places. The Wall Brown is a medium sized butterfly with a wingspan of 45-53 mm and they can have up to two broods per year. 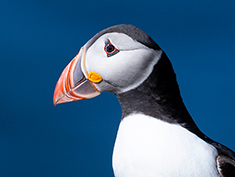 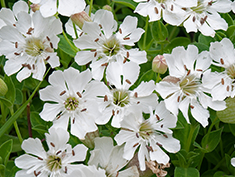 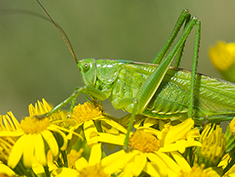 A few of the smaller species of insects and reptiles that you might spot...