These are just a few of the bird species that you might spot when you are exploring around the Park and further afield. 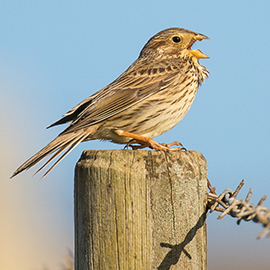 Whilst you are out walking and exploring the open farmland and meadows that surround Mother Ivey’s Bay, listen out for the song of the Corn Bunting. Their wonderful song sounds just like a set of jangling keys. You can often see them perched prominently on a hedge, post or wire and they nest on the ground in rough grassy margins or arable crops. The Corn Bunting is a farmland bird that has suffered a dramatic decline and is now listed in the UK as a Red List Species. 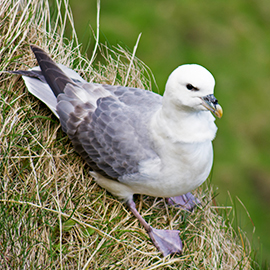 One of the most majestic sea birds in flight and related to the Albatross. Fulmar live offshore and only come into land to breed. They can be found nesting in colonies along the cliff edges around the Trevose Headland and further along the cliffs of the North Cornwall coastline. When they are at the breeding sites, watch them riding high up the cliff edge using the up-draughts, its quite a spectacle to see just how they manage to fly so close to the cliff edge. 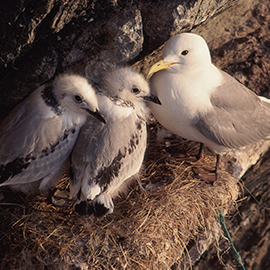 The Kittiwake are pretty, little gulls and another sea bird that spends the winter out at sea. It only comes inshore to breed in colonies along the cliff edges around the Trevose Headland and further along the cliffs of the North Cornwall coastline. Named after its call and can be identified easily when you hear its ‘kittiwake’ call. Unfortunately its population is now in decline and is listed in the UK as a Red List Species.

When to see: February to October 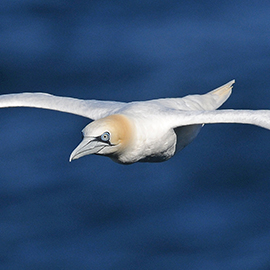 When you are on the beach at Mother Ivey’s Bay or walking along the South West Coast Path, keep a look out in the Bay for a group of very distinctive large white birds with black wing tips, diving head first into the sea to catch fish. With their wings folded right back making a torpedo shape, Gannets can hit the water at speeds of up to 60mph. They can also been seen flying low to the water around the Trevose Headland.

When to see: January to August 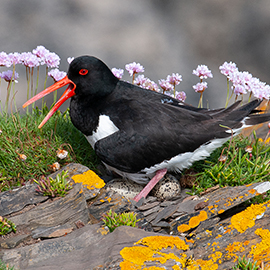 The Oystercatcher is a very distinctive black and white bird with a long orange beak and pinky legs. They also have a very vibrant red ring around their eyes. Oystercatchers have a very loud ‘peep-ing’ call which is very recognisable. They can be found on the rocks around Mother Ivey’s Bay, hunting for shellfish, particularly limpets, cockles and mussels. When the tide is out over at Booby’s Bay, have a look at the rocks there as that is also a good place to spot them. 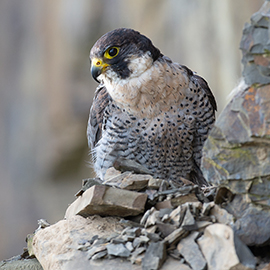 Look out for a bird with long, broad, pointed wings and a relatively short tail. It is blue-grey above, with a blackish top of the head and its breast is finely barred. The rugged cliffs around the Trevose Headland and further along the coastline are the perfect habitat for the UK’s largest falcon. You may spot a Peregrine flying along the edge of the cliff face at speed or perched on a rugged cliff edge waiting for an opportunity. Either way they are quite a stunning bird to see. 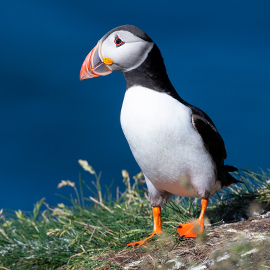 The Puffin is one of the most colourful seabirds in the UK. In late March to early April, they come back inland to breed as they spend most of their lives out at sea. Further up the coast from Mother Ivey’s Bay is where you will find the only puffin breeding colony in Cornwall, on an island locally known as “Puffin Island”. Puffins nest inside burrows which are clearly visible on the cliffs of the rumps on the island. If you would like to see Puffins there are regular boat trips from Padstow.

When to see: March to late-July 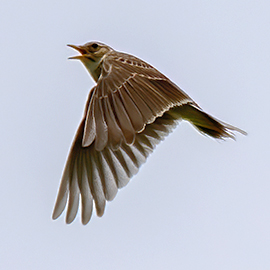 Whilst you are out exploring the open farmland and nature reserve that surrounds Mother Ivey’s Bay, listen out for the song of the Skylark. Singing their renowned song from a great height, they can be spotted rising almost vertically and they hover effortlessly, before parachuting back down again. Skylarks are ground-nesting birds and will breed from April to early August. They have recently suffered a dramatic decline and are now listed in the UK as a Red List Species.

When to see: All year Around 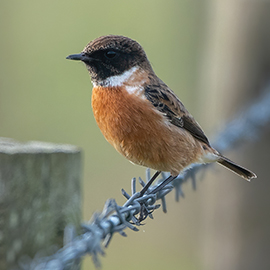 Stonechats are frequently seen flicking their wings while perched on the tops of gorse bushes and tall brambles or on fence lines. Listen out for their loud call that sounds just like two stones being tapped together. The male is very colourful and has a striking orange-red breast. The females don’t have a black head and are duller in colour. They can been seen in and around the Mother Ivey’s Bay five acres of Nature Reserve as well as the Trevose headland. If you spot a male or female first, you can be sure that the other will be not far away.

When to see: All year Around 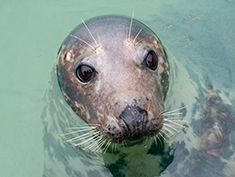 Keep your eye out when you are exploring the Trevose Headland and Coastal... 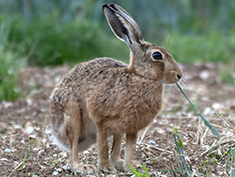